Late today, (Wednesday, May 30), ProgressNow New Mexico received information that the proposed case had been removed from the Oil Conservation Division docket altogether after pressure from the public (including this original story from PNNM), further inquiries from other press sources, and an apparent inquiry from Attorney General Hector Balderas’ office.

While a spokesperson for the AG’s office wouldn’t confirm that the item was no longer being considered, they did comment that the office was looking into the issue.

“The Office of the Attorney General is monitoring this issue and will always take appropriate action to ensure that government agencies and processes are transparent and open to the public,” said James Hallinan, Communications Director for the AG’s office.

ProgressNow New Mexico was provided with an email exchange between the attorney for the OCD and Hilcorp’s attorney’s showing that after the case was slated to be moved until Friday (likely due to the expected turnout), Hilcorp informs OCD’s lawyer that “Hilcorp is withdrawing its application in Case No. 16193. Accordingly, there is no need to hear argument on a continuance or interventions on Friday morning.”

ProgressNow New Mexico reached out to local rancher Don Schreiber for a reaction to the news that the case had been withdrawn:

“My faith in direct democracy is restored, especially with the involvement of public interest groups, the press, and the involvement of the Attorney General’s office, that government agencies remain transparent, and that decisions involving oil and gas in New Mexico remain open to the public,” said Schreiber.

So for the moment the issue is resolved, but it’s worth reminding readers that Hilcorp is still seaking variences to the well spacing in San Juan County during tomorrow’s hearings and that those open meetings are what makes both private industry and our governement officials accountable to the public at large.

This original story was published Thursday, May 24

At the heart of democracy is the simple concept that citizens have a right to be involved with government, especially when the decision making affects your livelihood, health, and community. From lobbying Congress to attending local school board meetings, direct democracy is fundamental to ensuring transparency from elected leaders and policies that are fair and balanced from those administrations.

So why is New Mexico’s largest producer of natural gas trying to silence public comment from the decision making process?

A local rancher and activist in the heart of natural gas country is asking those questions after discovering this week that Hilcorp, an out-of-state extraction company, is seeking to change the way permits are issued for well sites within the Permian Basin in northwest New Mexico. Don Schreiber is no stranger to controversy, having worked to help protect the land around his ranch for over 20 years from the environmental and social impacts of increased extraction near his home.

But Schreiber is now facing a new challenge, one that has huge implications for the way private companies interact with governmental agencies that are supposed to be working to protect citizens and consumers alike.

Hilcorp is arguably the largest investor in the region after buying out stakes from Conoco and other major producers in recent years. Last week they filed with the state Oil Conservation District to wave a rule concerning how many gas wells can be drilled within a given section of land AND they want those decisions to be made by administrative review, rather than through the public process.

ProgressNow New Mexico talked with Schreiber at length about what all this means for him as a local stakeholder and the broader implications for New Mexicans moving forward.

ProgressNow New Mexico: What is Hilcorp trying to do by asking for these changes to the law?

Don Schreiber: “What Hilcorp is attempting to do, what OCD is considering, is using a permitting process to change a state rule. What they’re trying to use is a sneaky, non-transparent, and an obscure way. Backing that up by not even allowing memebers of the public to participate in the public hearing.

You can see on the docket that they’re currently requesting 10 such exemptions to the current rules, and at least in theory we as the public can attend this hearing and contest those exemptions being made. If 16193 (the case number for the request) is granted, they can just bypass public input and ask for exemptions anytime they want from the local administrators.”

PNNM: What do you mean “not even allowing members of the public to participate in the public hearing?”

DS: “Hilcorp attorneys have objected and moved to strike us as interveners with a laundry list of legalese that says we have no standing; that we’re just a member of the public.”

PNNM: Who all is intervening in the case?

DS: “Myself and my wife, Jane, the San Juan Citizens Alliance, (and) the Oil and Gas accountability project, have all filed as of last night as interveners in this case. Our intention is to ask OCD to continue the case and not hear it on May 31 at 8:15 in the morning, next Thursday. Because the public is completely uninformed, they’ve had no chance to participate in an action that would completely change the rules in the state of NM.”

PNNM: This seems like a very specific issue. It’s definitely concerning for you and folks in your area, but why is this a larger issue for people around the state to be concerned about?

DS: “I believe, and I hope there’s a way to represent this in the press, that the well spacing is completely beside the point. It’s only the reason the case is entered. The reason for the guy at the Isotopes game talking to his buddy at the beer cart is ‘Hey did you see the largest company in oil and gas in NM wants to cut out public participation in how many wells get drilled.’ If they could do it here, they’ll try it other places. If they can have this one chocolate out of the box there’s every reason to believe they’ll come back for the rest of the box.”

PNNM: A private company seeking to usurp the public’s right to address a governmental body is a disturbing prospect. Have you spoken with anyone at the Oil Conservation District?

DS: “OCD has been extremely helpful in this emergency process as we’ve all been running around trying to figure all this out, helping us in understanding what options we have. Director (Heather) Riley, their attorney, their engineers, have been super responsive.”

ProgressNow New Mexico spoke with OCD today but was referred to OCD’s official spokesperson, Beth Wojahn. Wojahn asked that specific questions be submitted in writing and they would attempt to respond by the end of the day. That response has not arrived by the time of publication. Here are the questions we submitted:

PNNM: Don, while the issue at hand is the greater issue of the public having a role in local government as it affects us, can you tell us what’s at stake if more wells were to be placed within given sections of land near you?

DS: “Jane and I live where there are approximately 122 natural gas wells on and adjacent to our ranch, our public leasing allotment. For 20 years we’ve been intimately involved with the drilling of natural gas on our land. We live daily with the consequences of the oil and gas development. Surface destruction, erosion, loss of beneficial plants. And of course, all the consequences of natural gas being vented, leaked, and flared.

It’s impossible for us to escape the toxic effects of natural gas wells.

We are first and foremost concerned about the number of wells. If there’s one well it’s a problem. If there’s 2 it’s twice as bad. If there’s 24 it’s 24 times as bad. Up till now, we’ve at least had a voice in the process.

If this goes through we’d expect the number wells to proliferate on an unregulated basis.” 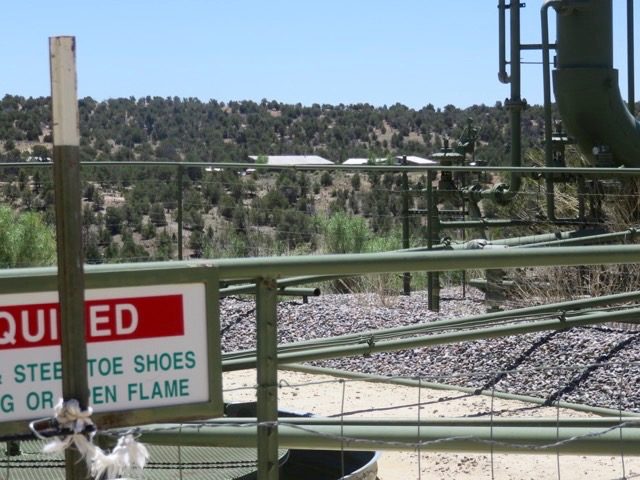 Wells surround the property around the ranch 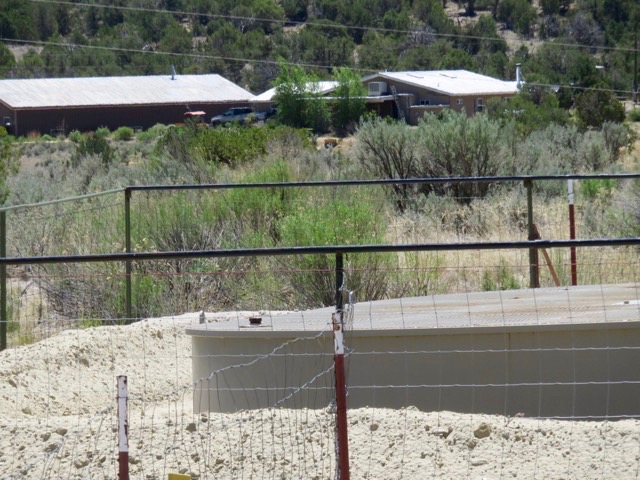 Some of the wells are very close to the Schreiber's home 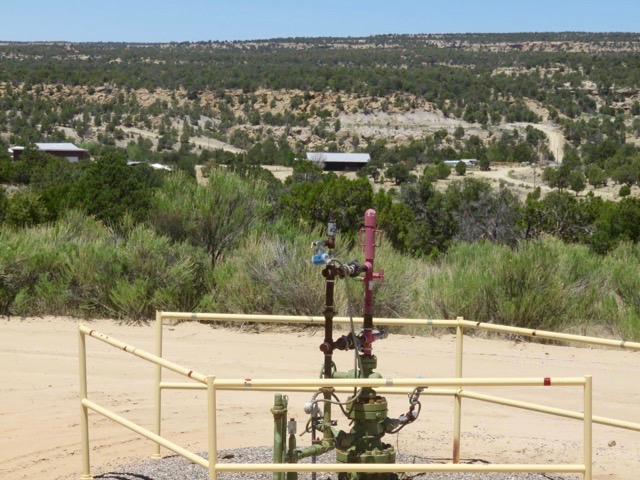 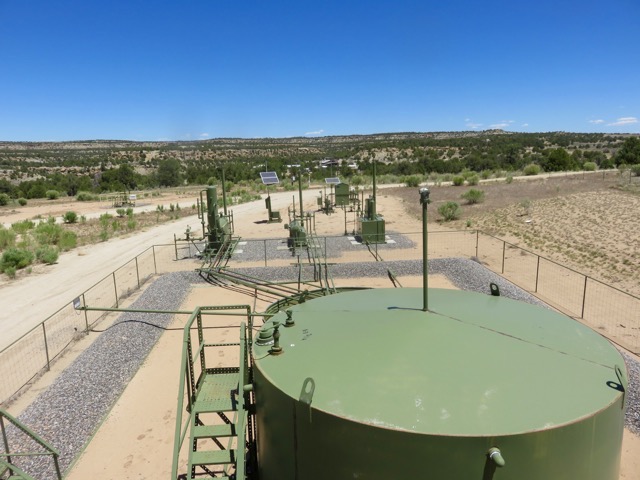 PNNM: What makes you expect the number of wells to increase so high?

DS: “History. In 1939 when OCD was established to help set a basis to set well spacing and make sure underground resources weren’t wasted and that you can’t steal your neighbors’ minerals the rules were one well per 640 acres ‘section.’ Oil companies have pushed over the years for up to 24 wells per section currently.”

PNNM: Thank you for talking with us Don. What, if anything, can ProgressNow New Mexico readers do if they want to help voice opposition to this issue?

DS: “I think it’d be great if people emailed OCD Division Director Heather Riley and let her know that it’s completely inappropriate for this issue to even be considered and be on the docket for this hearing. Public input is vital on issues such as this.”

ProgressNow New Mexico will be monitoring this issue as it moves forward. For those who’d like to reach out to Director Riley, her email is heather.riley@state.nm.us