Let’s face it — it’s been a crazy primary season. Some people armed themselves with hand sanitizer and face masks as they headed to the polls while others made use of their absentee ballots by mailing them or dropping them off at their respective polling places. Together, we adapted to a global pandemic and exercised our right to vote.

This year, ballots are taking a little longer than usual to count, but we can already see that real change is here.

Tuesday’s primary elections were a big loss for Big Oil and for entrenched pro-oil democrats who received help directly and indirectly from oil and gas companies, their lobbyists, and their PACs.

The astroturf PAC New Mexico Strong has received nearly $3 MILLION dollars in the last couple of years directly from Chevron and this year brought over $700,000 of that to bear trying to reelect a cadre of “Democrat” Senators who have historically voted against their fellow Democrats on progressive issues. Most significantly were the defeats of longtime Chair of the Finance Committee John Arthur “Dr. No” Smith and Senate Pro Temp Mary Kay Papen. Both were brought down by political newcomers campaigning on platforms of change and progress. Smith was defeated by grassroots activist Neomi Martinez Parra and Papen by Carrie Hamblen, President of the Las Cruces Green Chamber of Commerce. (At the time of publication, Hamblen is expected to hold onto a 4% lead over Papen in SD38). New Mexico Strong had targeted sites for five senators this cycle, besides Smith and Papen, Senator Clemente Sanchez and Senator Gabe Ramos also received their marching orders from voters. Of their five Big Oil champions, only Senator George Munoz appears to be coming back next year.

In the second congressional district Republican field Claire Chase, a former New Mexico Oil and Gas Association board member, lost handily to Yvette Herrell, despite being backed by Big Oil and Gas at every level.

Claire Chase is the past chair of NMOGA and her husband Chance Chase is VP of Mack Energy. Mack Energy are themselves major donors to a number of conservative PACs in New Mexico as we reported recently. Chance also served on the board of directors of former CD2 Representative and now New Mexico GOP chairman Steve Pearce’s 501c4 GOAL Advocacy. Also on that board was Nancy Brantley, wife of George Brantley, the first named donor to… Citizens for a United New Mexico. And just to bring it all together, that PAC that was backing Chase in the primary race for the Republican nominee in CD2, Citizens for a United New Mexico, was funded and run by the East Coast cabal that also runs Power The Future.

New Mexicans know how significant Oil and Gas is to the state when it comes to revenue for our schools and jobs for our workers. But we also know that the outsized influence that the big out-of-state corporations play in our politics with all that Big Oil Money is problematic. We’ll let one of NMOGA’s own spokespeople sum it up:

“Every dollar that a company has to spend is a dollar that comes out of what they can pay people.”

We agree John, maybe stop spending so much money trying to buy our state elections and you could hire back all the workers you laid off this year.

There were two races (no pun intended) where racism played a hand in candidates’ defeat. Bernalillo County Commission district 3 candidate Adrian Carver and U.S. House of Representatives district 3 candidate Valerie Plame went down faster than the car seen driving in reverse on Plame’s campaign commercial. Plame, who tweeted anti-Semitic remarks, and Carver, who used racist campaign tactics because he thought slamming a progressive champion would win him the race, both lost. More importantly, two women of color who have worked in our communities for years and who hold our progressive values so close to their hearts won. Teresa Leger Fernandez won the Democratic primary for Congressional District 3 and Adriann Barboa, facing no opponent in the general election, is our new County Commissioner for Bernalillo County Commission District 3!

With primary elections happening against the backdrop of communities rising up in support of Black lives, it seems appropriate that the election results were more reflective of the voices of our communities. After months of COVID devastating our families- particularly POC families- and after several Black murders at the hands of police were finally recognized in the mainstream media, we are finally starting to see a little glimmer of light – even if (for now) it’s only in local New Mexico politics. Of the 38 Progressive Champions running in the primaries, 31 of them were either women, POC and or from the LGBTQ community. Nearly 75% of them won their elections last night, 17 of whom were women. Even more, when our champions make it through their general elections, New Mexico will send an all women of color delegation to serve in the U.S. House of Representatives!

The response was loud and clear: access to abortion is essential and families across New Mexico stand in support of women having the ability to make their own pregnancy decisions. Get in our way? We. Will. Vote. You. Out. After the unexpected passing of Senator Cisneros, New Mexico was left with seven Democrat Senators who voted to keep an abortion ban. After last night’s election results, it looks as if FIVE of them will be replaced.

To boot, New Mexico saw wins for reproductive champions in districts like Senate District 9, formally represented by John Sapien. We picked up an incredible advocate in Brenda McKenna! And least we forget CNN hero Roger Montoya, who won handily against his outspokenly anti-abortion opponent Matthew Gonzales in House District 40.

The last little reproductive rights victory? Elisa Martinez – Founder of an anti-abortion extremist organization in New Mexico – lost her race against a weatherman. What is it with Republicans electing reality TV stars? :::face palm:::

The bottom line: New Mexicans support access to abortion. After this shakeup, it is clear that the Senate must reflect that position in its leadership as well. We’re calling for no more anti-abortion leadership in our state Senate. Namely, in whoever becomes the new Pro-Temp and Chair of the Senate Finance Committee. It’s simply not the will of the people of New Mexico.

Here’s a look at all of the Progressive Champions who won their primary races. 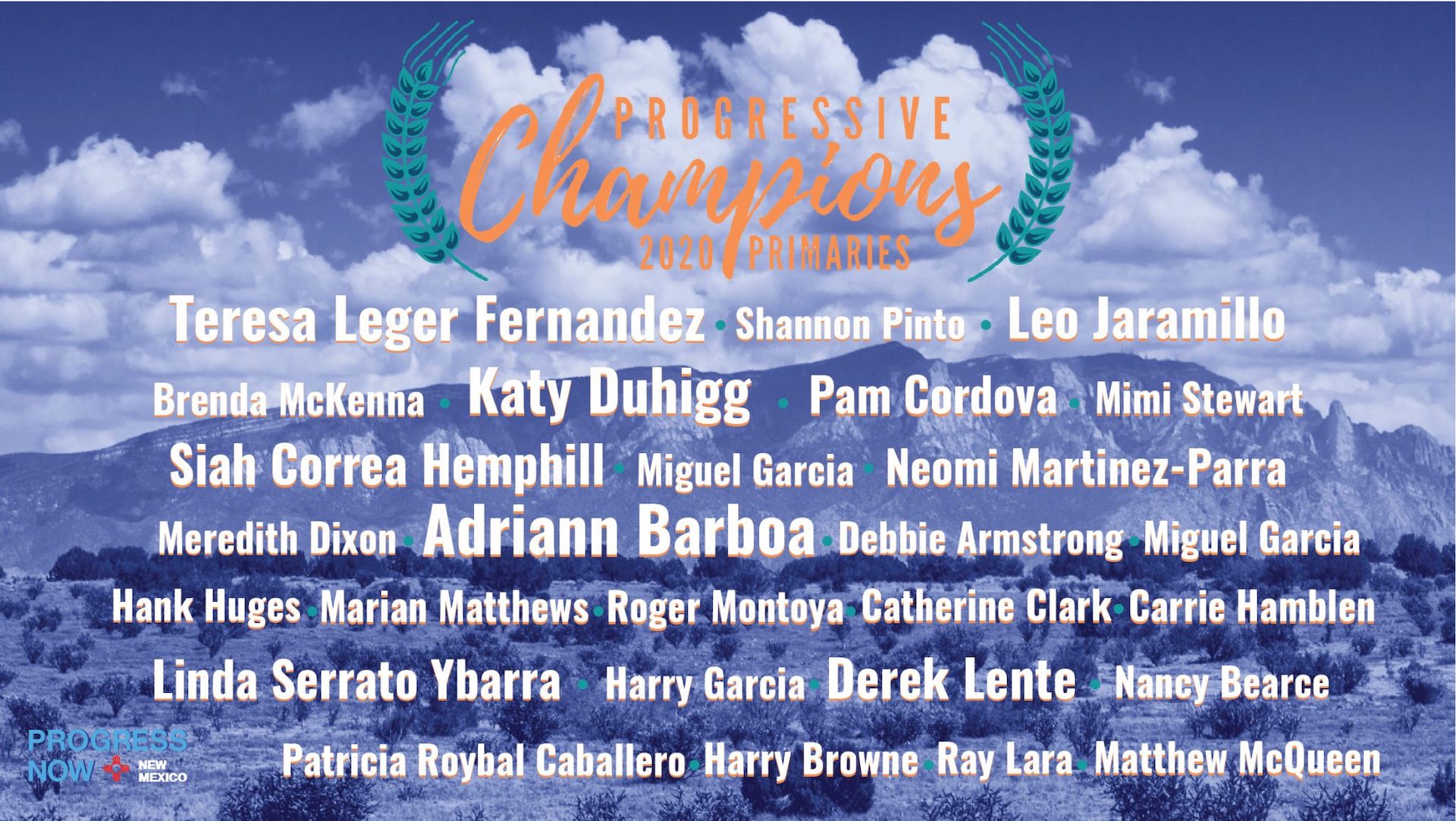