HB75 Fairness for Patients Should be the End of Corporate Rule

Fear-based politics should have died when Donald Trump left office. Yet, we find it alive and well during the 2021 legislative session, where multi-billion dollar corporate lobbies are directing their CEO’s and business interests to call legislators and sound the alarm that the sky is falling.

Nowhere are the manipulative tactics more apparent than in the discussion over House Bill 75, the Fairness for Patients Act, which seeks to hold multi-billion dollar corporate hospitals accountable for negligence that happens under their watch and (finally) boots out corporations from the Patient Compensation Fund that *local* doctors pay into, while multi-billion dollar, out-of-state corporations get paid out.

In a true David v. Goliath situation, patients’ efforts to recount stories of negligence by the hospitals without any corporate accountability are pitted against pressure-based scare tactics directed at our legislators by big-money CEO’s.

In fact, when we tried to help place an ad in the Santa Fe New Mexican in support of HB75, we were censored and asked to take out the words “negligence” for fear of ruining a relationship between the hospital and the paper. In what should be a free and fair press, these bought and paid for relationships should not be allowed to unduly influence the ads, stories and op-eds that are and are not allowed to run. Especially when it comes to critical pieces of legislation that help New Mexico families.

For accountability’s sake, and to put these threats in context, scare tactics themselves are nothing new. Corporations have been buying and influencing votes for years. In fact, the debate over HB75 is eerily familiar to other pieces of legislation that are critical for our families.

In the battle over HB75, here’s what we’ve heard:

“If HB75 is passed, patients will pay more.” Where else do we hear this argument? During the debate to raise the minimum wage. It’s a manipulative tactic used to invoke fear that the customers will incur the cost of a hit that the corporations should be shouldering… especially multi-billion dollar corporations like those opposing HB75. Let’s get real: patients are already paying the price with their lives.

“If HB75 is passed, hospitals will leave the state.” Where else do we hear this tired excuse? Paid sick leave. Instilling the fear that businesses will leave the state is a go-to scare tactic for those who can’t bear to see workers, patients, or families have equal opportunity to access basic forms of healthcare and justice within the healthcare system.

“If HB75 is passed doctors will leave.” Where do we hear this? In the debate over repealing New Mexico’s 1969 abortion ban. With nothing better to cling on to, they rely on non-existent data (aka made-up disinformation) to try to sway the argument.

The strategy behind the scare tactics is the same. In fact, their talking points are even the same and it’s time we recognize them and call them out when the game is being played. Corporations and their allies use fear because they can’t imagine a world beyond that. They reap their profits on the backs of our families and refuse to entertain a proactive vision for what could be… only what has been. And what has been isn’t good enough for the families we care about.

It’s laughable to see multi-billion dollar corporate entities complain about the solvency of a fund they literally reap billions of dollars from.

Just take a look at their profit margins: 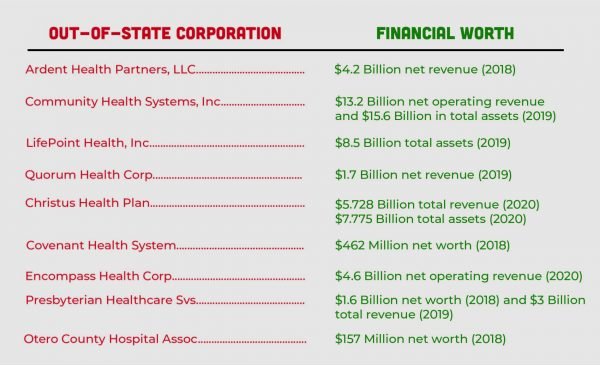 Meanwhile, the CEO’s continue to call legislators, complaining of money and “solvency” and remain completely disconnected from a day in the life of a family who has suffered because of medical negligence.

Current law allows patients to receive about $20 a day over the average course of a loved one’s life.

20 bucks. How is that supposed to replace the loss of a job, a limb, an organ…a life? But sure… let’s keep feeding into the tired, sky-is-falling-doctors-are-going-to-leave-solvency narrative. Surely, our grief is their greed.

The division could not be more clear. Corporate interests vs. the people of this state. Our moral values should tell us where the burden should lie, and the answer is not with patients. There is no justice without accountability and it’s high time corporate hospitals own up and pay their fair share.