CONFIRMED: NM Oil & Gas and Power the Future Working Together

ProgressNow New Mexico has come into possession of a PowerPoint presentation from 2018 that was prepared by the New Mexico Oil and Gas Association and seemingly presented by their Communications Director Robert McEntyre. 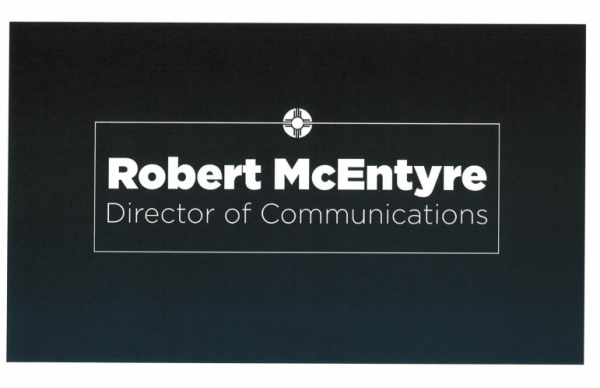 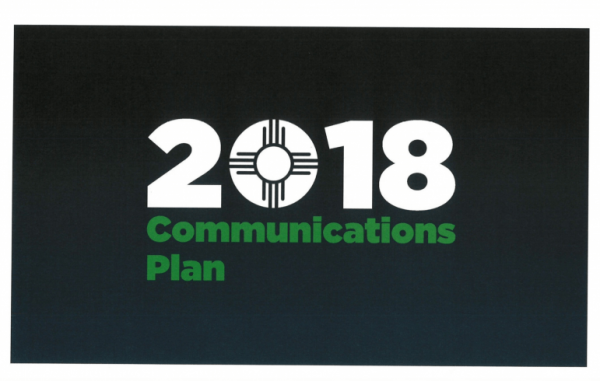 It contains slides with then forthcoming plans to expand their digital and traditional media reach into New Mexico, but more significantly, it confirms that NMOGA planned and has continued to collaborate directly with out-of-state lobbying group, Power the Future.

You can see the whole slideshow here:

You can clearly see on slide six, the final bullet point: “Coordinate allied groups and align strategies and messaging.” 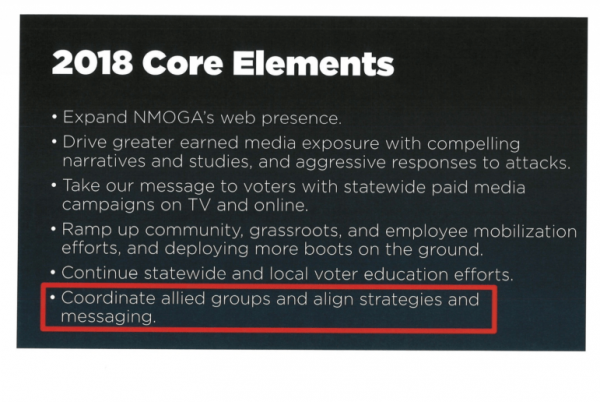 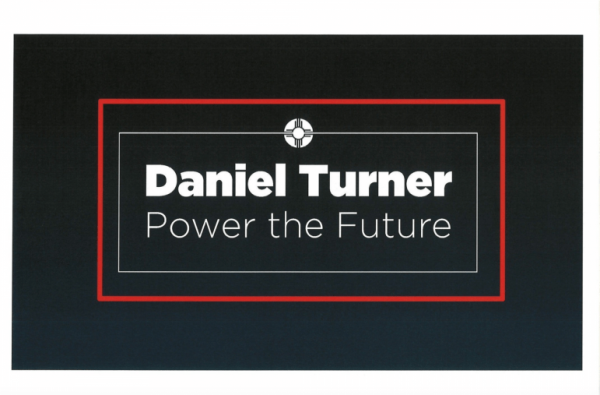 For the record, we know Turner was in NM during the summer of 2018. He tweeted a video of himself with a billboard Power the Future apparently bought in Sandoval County.

Turner is based in Washington DC and started Power the Future sometime at the end of 2017, beginning of 2018. According to articles about him, he comes from working directly with Koch Industries and before that the Bush administration (Bush 2). Turner is obviously vehemently a climate science denier, but also a pro-Trump nationalist who echoes a lot of jingoist mantras on Twitter.

So yeah, we’ve been saying Turner’s PTF has been in cahoots with NMOGA for a while now. And it’s pretty clear from the slides, we were right.

The intro slides for Turner are followed by a series of slides with PTFs branding and images similar to those found on their national website, as well as Turner’s personal contact information on slide 39. 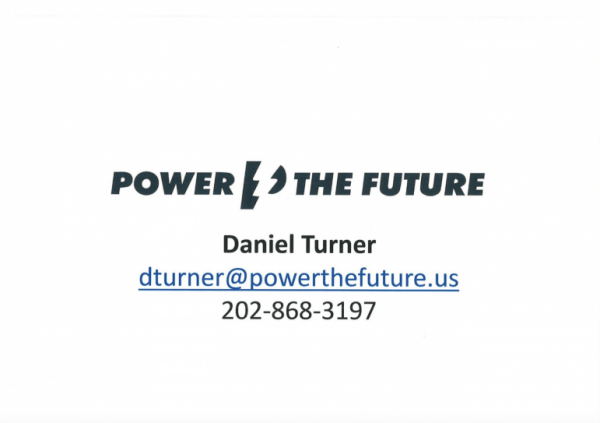 That section of the presentation also contains a slide with the names and logos of known Environmental organizations with the phrase “By establishing ourselves FOR something” we invite attack in our circle.”

This appears to refer to PTF’s claims that they represent “energy workers” and that attacks on them equate to attacks on workers. Since we know that PTF has actively lobbied in New Mexico against the Energy Transition Act and the money it includes SPECIFICALLY for workers, it would appear their claim to represent energy workers is limited to their messaging documents and plans only, not when it comes to actual policy that supports workers.

There’s a chart within the slideshow that indicates each organizations’ role within their coalition. While researching each of the listed acronyms it was interesting to note that one column just said “Harris” and that whoever Harris is, is besides NMOGA themselves, the only organization listed as “Rapid Response” AND “Employee.” This indicates that Harris does paid digital media services within this coalition, and as it happens, there’s a company out there that might just fit the bill.

Harris Media was founded by Vincent Harris, “the man who invented the Republican internet” according to a Bloomberg article. Harris Media bills itself as a “communications and marketing agency of creative digital strategists, graphic designers, videographers, and web developers. We have worked with heads of state, influential advocacy groups, and Fortune 500 companies.”

Sounds just like the kind of company you’d hire to run a multi-level, multi-partner coalition looking to expand their digital footprint, don’t you think?

But when you look at who Vincent Harris himself is and his clear values, it also makes sense that he would work with conservative oil and gas advocacy groups like NMOGA and their partners.

In HIS own words:

“Vincent Harris is CEO of Harris Media and recently served as Chief Digital Strategist for Senator Rand Paul. Previously he has worked on the digital side of three Presidential races, having run all online operations for Texas Governor Rick Perry and Speaker Newt Gingrich’s 2012 campaigns. In 2014 Vincent was hired by Israeli Prime Minister Benjamin Netanyahu to oversee the digital operations for his Likud party’s successful campaign. Vincent spent over three years working with Ted Cruz, whom many have credited his successful use of the web as part of his incredible underdog win.”

But what’s interesting is his bio up there doesn’t show some of his um, other projects…

There’s more evidence that the firm itself is tied to White Nationalism. Harris media once employed a woman who actively participated in the Charlottesville Virginia “Unite the Right” rally that ultimately led to the death of one counter-protester in 2017.

For clarification on the rest of the chart, NMOGA is New Mexico Oil and Gas Association, AHCC is Albuquerque Hispano Chamber of Commerce, CEA is Consumer Energy Alliance, NAM is National Association of Manufacturers, NMBC is New Mexico Business Coalition, Harris is (likely) Harris Media, and PTF is Power the Future. 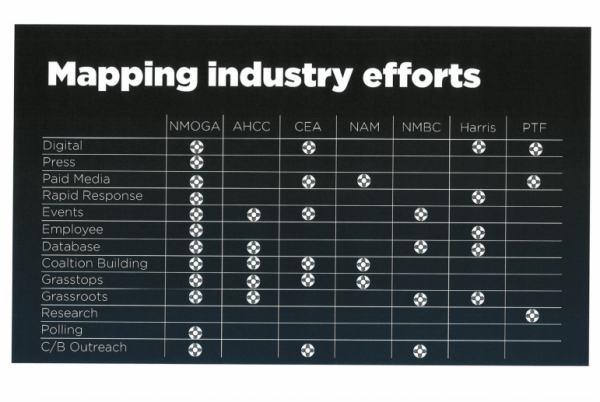 So. What do we know?

We know that NMOGA and PTF have absolutely coordinated their efforts when it comes to trying to push their agenda in New Mexico. While NMOGA stands by to promote the “contributions” that oil and gas makes to the state, PTF comes after anyone who fights for the clean energy future we know New Mexicans want and support. And while NMOGA claims to be focused on oil and energy issues in New Mexico, they’ve made some pretty bad bedfellows by aligning themselves with vocal white nationalists like Turner and Harris.

Is that really the kind of company other New Mexico organizations like the Albuquerque Hispano Chamber of Commerce and New Mexico Business Coalition are wanting to be associated with?

On slide 29 the Albuquerque Hispano Chamber of Commerce logo is listed along with bullet points stating: “A new partner to build support for industry in Bernalillo and Dona Ana (sic),” and “Cultivate grassroots supporters and community leaders, developing large, diverse coalitions.” 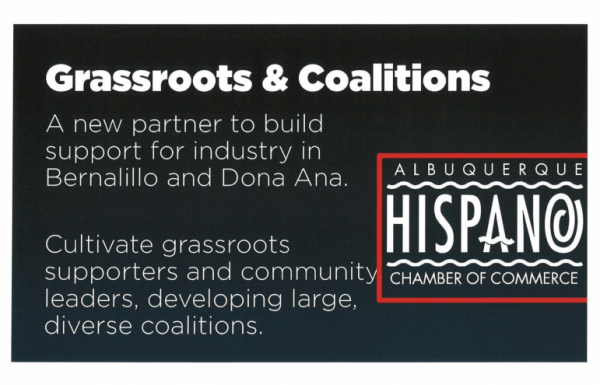 Slide 30 shows the logo for the New Mexico Business Coalition, with the bulleted points: “Partnership to extend reach to business and industry-minded New Mexicans,” “A non-industry voice to policymakers and media,” and “Coalition organizer.” 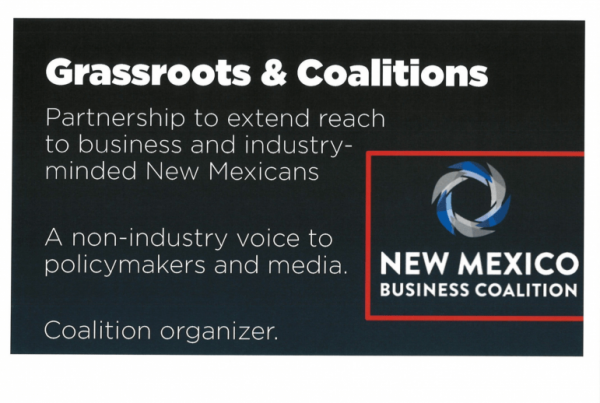 Are these organizations fully aware of the kind of companies they’re keeping by being a part of this coalition?

Between funding directly from oil companies that make up the membership of NMOGA, the even deeper pockets of the (likely) Koch funded Power the Future, and the high-level political connections of Harris Media New Mexico hardly stands a chance when it comes to the onslaught of political blustering these groups can wield.

It’s worth remembering that NMOGA’s Executive Director Ryan Flynn once promised that “NMOGA is going to be the most powerful organization in the state of New Mexico.” 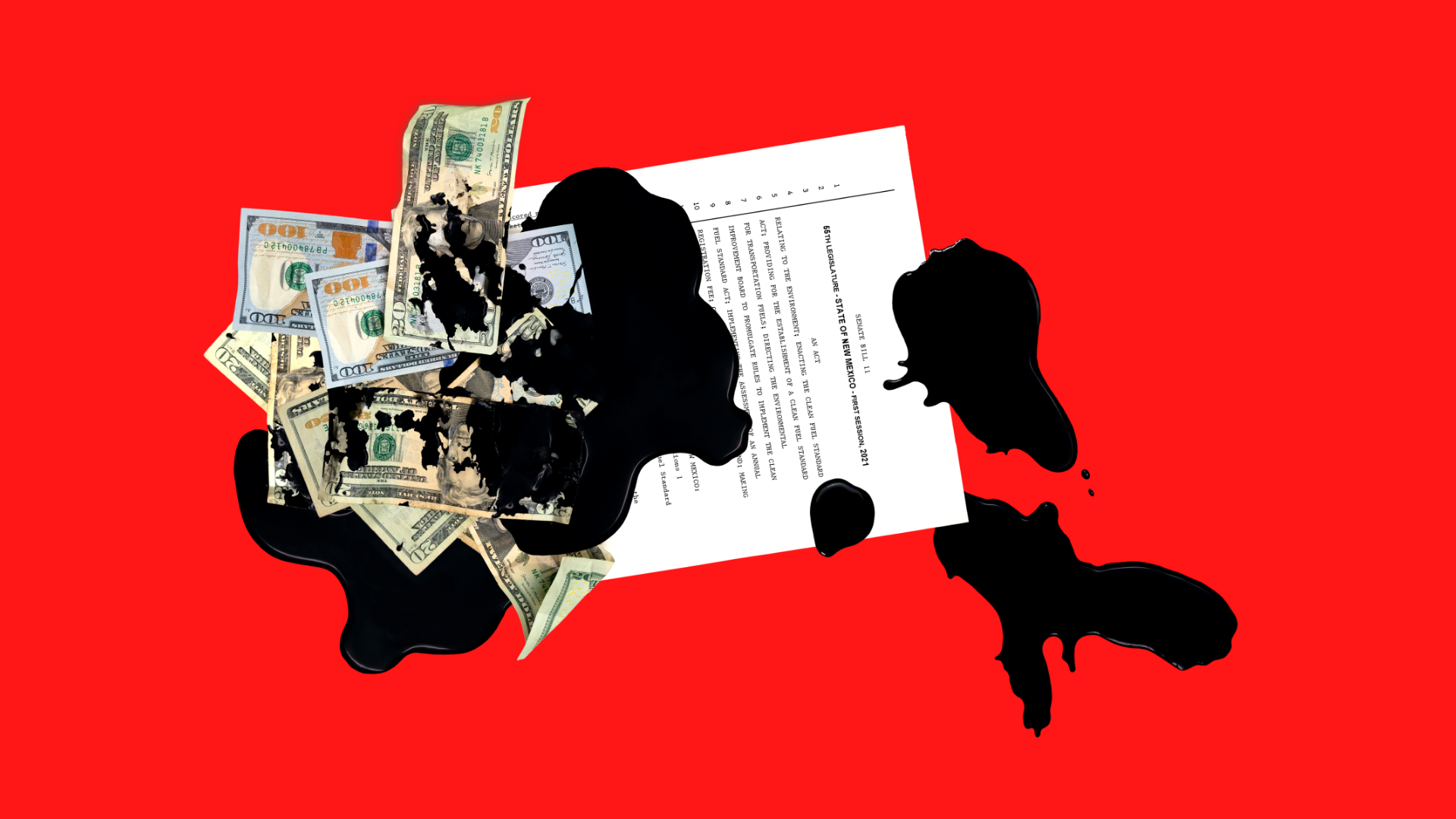